Will the Flu Bug You? 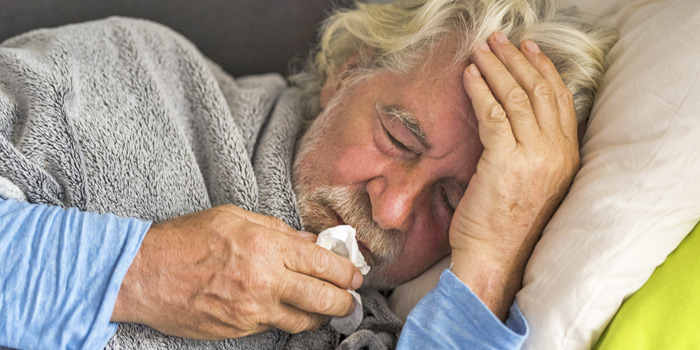 As people age, their ability to recover and the body’s ability to heal is slower that it was in earlier years. As a consequence, the flu season represents a more serious issue for the older population.  Age plays a big part in determining who gets sick and how ill they become. The likelihood that seniors have other complicating factors like heart disease, diabetes or obesity can compound the risk. And, even though it is a good idea to be vaccinated, unfortunately, vaccines do not work as well as you age.

Depending on how serious the flu season is, between 750,000 and 1,000,000 people are hospitalized with the flu each year. Thirty to eighty thousand of them will die, with between 50 and 70 percent of them being over the age of 65.

The flu begins with an inflammatory response in the body to fight off infection. That triggers the aches, pains and respiratory distress.  The flu virus infects the cells lining the mucous membranes in the throat, nose and bronchial tubes.  Bacteria can clog the air sacs in the lungs making it difficult to breathe.  Bacteria can then escape into the bloodstream and cause sepsis. One possible outcome of sepsis is organ failure which is how the flu can lead to death.

If you experience any of the following symptoms it is important to seek immediate care:

If you think you may be getting the flu, it is important to seek medical treatment immediately and inquire about starting an antiviral medication like Tamiflu. If started within the first 48 hours after the onset of symptoms the flu can be greatly reduced in length and severity.

Getting vaccinated against the flu may be the most important step to preventing or reducing the impact of the flu in the first place.

Setting up Medicare Right – and On Time
True or False: Memory Loss means Dementia?
Respite Reminder
Gifting Your Assets to Family or Friends
Tax Benefits from Caring for an Elderly Loved-one
Bonding with Your Homecare Provider
Long Term Care – An Important Investment
Estate Planning Mini-Dictionary
When to Ask for the Keys to the Car